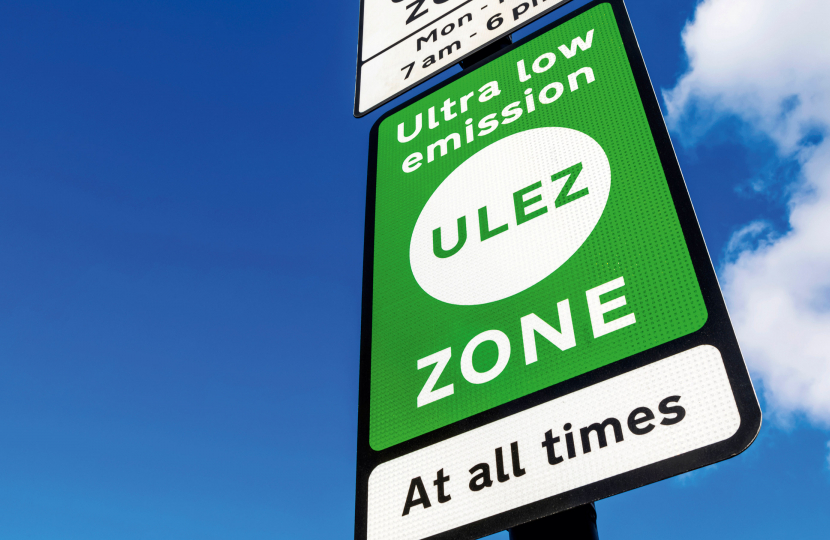 Sadiq Khan’s decision to expand the ULEZ to include all of outer London - including Biggin Hill, Coulsdon and Kenley - is a reckless raid on the pockets of residents and local businesses.

Mayor Khan has announced the expansion with just 9 months’ notice, during a time of high inflation where buying a new car is simply unthinkable for so many.

I signed an open letter, sent by the Orpington MP Gareth Bacon and 27 other Conservative MPs, opposing the Mayor's ULEZ expansion.

"Sir – The Mayor of London's decision to ignore Londoners’ objections and expand the Ultra Low Emission Zone is undemocratic and a hammer blow to households’ budgets.

Thousands of people and businesses responded to Transport for London’s consultation in good faith – and overwhelmingly said no to ULEZ expansion.

But Mayor Khan is imposing the daily £12.50 charge regardless, giving people only nine months to prepare. With sharply rising energy bills and inflation, few can afford the charge let alone buy a compliant vehicle.

Outer London doesn't enjoy the same public transport as central London. Nor does it have the same air quality problems. It is also inseparably connected to the Home Counties, with thousands of people driving into work, shop and visit each day. We need targeted solutions, not a blanket road charge.

The ULEZ was never intended to apply to outer London. This is a smash-and-grab raid on drivers’ wallets that has nothing to do with their quality and everything to do with Mr Khan's mismanagement of TfL finances. And it comes at the worst possible time for household incomes

We urge the Mayor to cancel his ULEZ expansion. It is regressive, unfair and a waste of money. Instead, outer London needs more electric buses, charging point infrastructure, and public transport options."

I was at the Prime Minister’s speech this afternoon, where he set out his priorities for the year ahead.